Mastodon Starlink May Come to Cruise Lines, But It's How They Use it That Matters | CruiseHabit
Skip to main content

Starlink May Come to Cruise Lines, But It's How They Use it That Matters

Internet access on cruise ships varies in speed and reliability, but is often known for being slow. Recently, Royal Caribbean announced their intention to work with Elon Musk’s Starlink satellite internet service and even appears to be testing it on one of their vessels.  The reality is, however, that what stands in the way of staying connected at sea isn’t fast satellite service, it’s how cruise lines use it, and Royal Caribbean isn’t using it well.

For all lines, keeping guests and crew connected is a matter of cost, not capability. Sure, some will say, "ship internet is slow, Elon Musk will make it better," but it's not that simple.  SES (formerly O3b), is the provider used by much of the Royal Caribbean fleet, as well as Princess Cruises, Virgin Voyages, and now some Disney Cruise Line ships.  Their services deliver impressive speeds and capacity to some ships, while others struggle to keep up.  We’ve even worked remotely cruise ships equipped with this service for days at a time.

Above is a recent speed test from Virgin Voyages’ Scarlet Lady - This test shows results most casual users would be very content with.  It’s not just SES.  Speedcast, another provider, offers quality connectivity on some MSC ships.  This may come as a shock to Royal Caribbean loyalists accustomed to their claims that “Voom” (their term for shipboard internet service) is, “the fastest internet at sea.” It’s not.  Below is a speed test from a Royal Caribbean vessel taken in mid 2019. This would quickly frustrate someone trying to execute simple tasks, like checking into a flight.

Interestingly, when some Royal Caribbean ships, like Allure of the Seas, first came online with SES six years ago, it was much faster than it is on those same ships today. Again, the providers work well on other lines, so this means that the bottleneck is the ship’s network, not the satellite connection.  Throttling speeds to make sure that no single person uses more than their share of bandwidth is standard practice, but it appears these caps are extraordinarily slow.

11 Tips for Staying Connected at Sea

While speculative, Royal Caribbean’s slow speeds are likely due to cost containment.  Making available enough bandwidth for guests to experience better speeds may require a higher cost (more simultaneous satellite connections, a different plan, etc).  Yes, shipboard networks do more heavy lifting than ever, but that shouldn’t be a factor on brand new ships like Wonder of the Seas. Restricting speeds on these ships, despite using a satellite provider shared by other lines with faster service, makes it hard to imagine any reason for the slowdown, other than saving money.

The Difference Starlink Could Make

Don't get me wrong, I’ve got nothing against Starlink entering the picture.  Competition is always a good thing, so if Royal Caribbean can get comparable access, at a price that allows them to open up the tap a bit more, that’d be a great thing.  Plus, there is one advantage that Starlink could have over existing providers, and that’s latency. 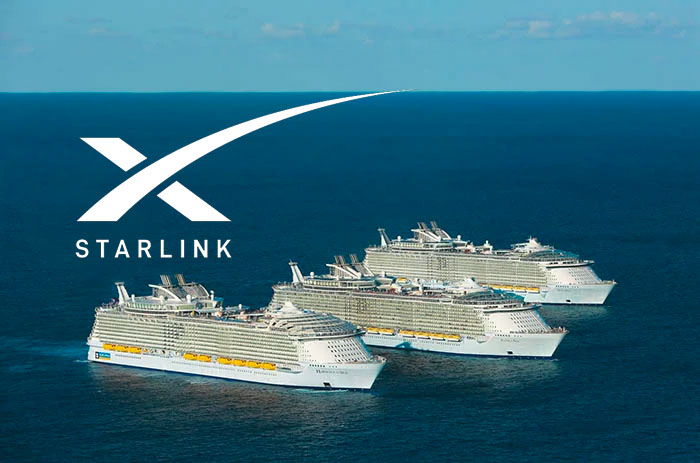 We wrote all about latency and satellite connections a few years ago, but the short version is that the higher up satellites are, the slower the connection is going to feel (especially for some things, like gaming or phone calls).  Think of it like watching a satellite feed on the news many years ago: The video and audio were clear, as there was a lot of data moving quickly, but there was a delay between when someone started talking, and when we actually saw and heard them start talking.  The lower the latency, the less this challenge exists.  Starlink satellites are in a lower orbit than the competition, which could improve performance a bit, with latency that is 1/5th to 1/10th what is common today.

Of course that competition also means that other providers may have to offer more or charge less, to compete with the new kid on the block.  Many lines may be locked into agreements with their existing providers, or simply not eager to invest money in new hardware that would be required to switch - so improving what’s out there now, by pressure lines to deliver better service, would be great as well.

Just a week ago, Royal Caribbean petitioned the Federal Communications Commission to expedite their approval of Starlink’s system for use on moving vehicles and vessels (something likely only a factor in territorial waters), and this weekend we saw Starlink gear installed on Royal Caribbean’s Freedom of the Seas (photo below, credit: Facundo Giacobbe via The Royal Family > Singapore Cruise Society on FB).  That’s progress, but it’s hard to say how quickly things will move from here. It’s not clear if the hardware installed on Freedom is “production ready,” how well it’s been tested in a high-salt environment, or whether or not it will work in higher seas.  Most satellite equipment on ships is installed on large gyro-stabilized platforms placed in protective spheres, designed to isolate them from the elements, while constantly adjusting, in real time, to point dishes at specific satellites despite a ship that might be pitching and rolling many feet in each direction.

Before rolling out for guest use, in addition to contracts and pricing agreements (which may or may not be in place), there’d need to be additional hardware deployments and network configuration.  Once ready to go, it remains to be seen if we’ll see this technology deployed fleet wide, only on ships that still have legacy hardware (barely supporting simple web-browsing today), or on some other combination of vessels.

We Should All Want This

Some cruisers are averse to staying connected at sea - and that’s okay.  Put away your phone if you want - you’re on vacation, and the choice is yours.  Trust me, though, you still want improvements here.  Ships use these connections for all sorts of things, and for crew, they’re a lifeline to home.

Virgin Voyages provides excellent connectivity for free, to all crew, but most lines charge for crew to access even sluggish service.  If these improvements can lead to improving the quality of life for the people working hard to ensure we have great vacations, then whether you're a digital nomad at sea, or a luddite in the sun, you should be eager to see these changes deployed. Personally, as frequent cruisers, we’re excited to see potential changes like this - we just hope that Royal and others implement new technology in ways that mean they can actually be fully utilized by guests and crew.